Cannabis68 clinic26 doctor35 florida61 healthcarethc58 insurance8 marijuana56
By Lois Thomson Dr. Michelle Weiner, an interventional pain management doctor at Spine and Wellness Center of America, says that because she has... 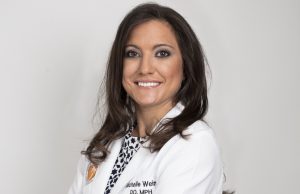 Dr. Michelle Weiner, an interventional pain management doctor at Spine and Wellness Center of America, says that because she has been able to study more and learn about the benefits of using cannabis to treat her patients, her job “has become so much more satisfying.” Referring to herself as being very athletic and health conscious, Dr. Weiner said she also majored in nutritional sciences, “So I’ve always been more into the holistic mindset. I’m more focused on function and quality of life, and specifically on decreasing pain.”

Because of that, when cannabis became legal two years ago, she began to read a lot about it and the endocannabinoid system, and thought it could provide a way to take patients off of opioids and decrease pain medications. “It either gives patients a more natural alternative earlier on in the algorithm of pain management; or, for the ones who are in chronic pain and have already tried physical therapy and injections and are on a lot of medications, it gives them another option to help them wean off the medications.”

Dr. Weiner’s initial idea was to look at cannabis mainly from a pain management perspective, but from her reading, she began to learn more about the other benefits that Cannabidiol (CBD) and Tetrahydrocannabinol (THC) could offer – benefits dealing with wellness, anxiety, and insomnia, along with the pain management. “I saw how well my patients were feeling as I was substituting the cannabis for a lot of their pharmaceuticals, and then people would come to me to say, ‘I want to get off my anti-depressant, or my sleep aid, and I hear this is another option.'”

Taking her work one step further, Dr. Weiner said she began to do some research with a friend, Purnima Madhivanan, Ph.D., M.D., who is an epidemiologist at Florida International University. They are conducting a study with their patients who use cannabis for chronic pain – if they agree, the two physicians will track them every three months and look at different outcome measures, such as anxiety, depression, sleep, quality of life, and physical function.

“We see how they’re able to decrease their pharmaceuticals, and also how the other outcome measures are improving as they’re using cannabis for the entire body, not just to treat a specific area. What ends up happening is that we’re using it for one thing – for pain – and then they’re saying, ‘you know what, I’m actually sleeping much better or my mood has improved or I used to have irritable bowel syndrome, or migraines, and that went away also.’ So they are often getting benefits they didn’t initially come to me for, and a lot of them are decreasing their medication, which is great.”

Dr. Weiner pointed out that sometimes when you start decreasing a medication, another is needed to counteract the side effects. “Some of my patients are very, very sick. I have some with brain cancer with metastasis, I have others who have Parkinson’s, or chronic pain, I have elderly with dementia; but then I also have someone like the 45-year-old who has anxiety and says ‘I’m on Lexapro and I want to get off of it.’ So I have a little bit of everything.”

Dr. Weiner said the cannabis plant actually has more than 100 components, and it’s important to educate people about that. “The part that makes you high is called THC. The stigma has been created because people have grown a high THC strain over time and sold this as recreational marijuana. But there are ways to use marijuana and not be high, and I think people need to realize that the stigma should be changed.

“For instance, I would use marijuana to help an opioid addict get off of opioids, because first of all, it will take away the withdrawal symptoms. It’s a healthier option, instead of going to a rehab facility where you’ll get benzodiazepine, which is an anxiety medication that is also addictive. So you’re just substituting one for another.”

She concluded, “Because of this, my job has become so much more satisfying. Most of my patients are so thankful either because they have another option, or because they just feel better. It’s a whole different way of practicing medicine. It takes a lot of education, I sit with them, there are the different routes of administration. So I really get to know my patients, and that’s what I love about medicine.”